Unlike the quintessential, plastic-like Hollywood “hottie” AKA Megan Fox-type, who look like cartoon characters (I’m thinking Jessica Rabbit), Emma Stone and her kindred bae, Anna Kendrik would no doubt rank highly on the Bill Simmons “Sneaky Hot Hall of Fame” alongside such luminaries as Anne Hathaway, Anna Pacquin and Natalie Portman. Real or not, they seem to have more “depth” somehow, that only nerdly-types like myself and Bill secretly believe we can properly appreciate.

Her heart of gold, absolute “cool-girl” character ending up with Jonah Hill’s well-meaning but abrasive nerd in Superbad only makes sense in Seth Rogan’s stoned-out, dick & farts-centric world-view. Her character in Crazy, stupid, love was an extension of that same smart-yet-goofy girl, but grown up. So it was to my surprise that I came away from Crazy, stupid, love not with a crush on Emma Stone, but… on Ryan Gosling.

Could Ryan Gosling be my ‘Not Gay Bae?’ He was Prince cool. Did you know the first line of When Doves Cry is “Dig, if you will a picture… of you and I engaged in a kiss”?

My dude. “DIG! If you will”! That is coooool. Could I ever say such a thing in my everyday life? “Dig if you will, this pie chart?” No. No I could not.

But The Goz! Such poise, such style, such self-assuredness of his place in the world on top of hot chicks. It was my first case of guy love. It was a thorough man-crush.

A man crush doesn’t equate to actual romantic or sexy feelings (though gun to my head, Clooney over Angela Merkle just saying), a man-crush results in the crushee appropriating the crushers mannerisms, tastes and dress sense. As this Huffington Post article says, it’s “A deep interest in the work of a man”.

The Goz’s character, whose name I have forgotten, drank Old Fashions. I started ordering Old Fashions. The Goz had abs and did handstand press-ups. I am working on these. The Goz dressed very well. I am trying. The only thing I didn’t pick up at all was a lot of hot chicks. His dress-sense though was the real eye-opener for me, as at the time I really, really did not dress well.

Working in advertising meant I dressed casually. “I’m too creative for business standard!” I thought, and wore my sneakers-jeans-t-shirt combos with pride. But post The Goz I felt like such a loser. The concierge in my apartment building for example, did not realise I even had a job for the first 3 years I had a job. He thought I was going to university. Perhaps it was the Che Guevara backpack. In the bin it went with its velcro and 2 minute noodle stains.

As The Goz eloquently put it to Steve Carell, “Are you Steve Jobs?” I was definitely not Steve Jobs, nor Zuckerberg nor any other singular empire owner who’s earned the right to be exempt. I had no business not dressing like a grown-up. I bought some ties.

So who else makes it into my man crush hall of fame? To whom I, along with I assume many other men, aspire to?

The Men of the World

A man of the world is a man of intellectual and financial power. A playboy, with presence. 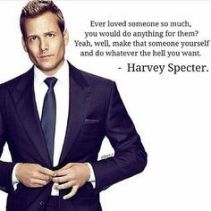 Harvey Spectre – The hero of Suits, and the second reason why I acquired ties and leather shoes. There is a character in Suits called Mike Ross. He does not matter. This is Harvey’s world. In Harvey’s world, there is no email. He takes a private car across town to walk into someone’s office just to call him an asshole. And then he just leaves. His apartment overlooks Central Park. His suits are Tom Ford. His hair does that “swoosh” thing. He has a Whisky decanter set at home and at work. He has Michael Jordan as a client. He has my attention.

Like Men of the World, they dress well, but have an air of mystery and danger. Secretly, they are talented killers. Oh, yes.

The cast of Inception – Such vests! Tom Hardy and Joseph Gordon-Levitt are bae. Leo is not, because he has blond hair. Just a personal thing, but grown men can’t be blonde. Which also removes both Thor and Barney Stinson from consideration.

Curry is his own category. There’s being good at what you do, which anyone can appreciate, and then there’s “another level”. Watching Steph shoot is the other level. Basketball watchers can appreciate seeing Steph “Go Monk” like Hansel as the alternate reality where the world feels out of alignment.

Last night in the NBA playoffs he murdered the entire state of Oregon in a perfect storm of 3pt shooting that Mark Walberg could drown in. Here is Portland Trail Blazers owner, Paul Allen the moment after Steph threw the hand grenade down on his team’s season.

You can see his soul leave his body. Holy shit. Basketball Jesus Christ. This morning Steph  was named the NBA’s first unanimous MVP. I own Steph’s signature shoes. Currently, I am 3 for 13 on in-game 3pt attempts in them. Soon…

“The men” are simply the apex.

King Leonidas – I don’t think it’s possible for any man to watch 300 and not have a strong urge to hit pause and do angry push ups. When you think “Leader of men” you think King Leonidas. Wherever he goes, it is Sparta. Sparta? This is Sparta. Greece? Sparta. Your favourite seat on the bus? It’s Sparta now. Move, bitch. Get out the way.

The Rock – He lives to lift, to eat, and just be great. Private jet, enormous house, tiny dog. Yes, Sir Mr. The Rock. I can smell what you are cooking.