Occasionally in life you’ll be on the receiving end of an inarguable point, the sort of point that causes a momentary brain short circuit, makes you say “ummmmm…” for a while and then concede that yes, Bryan Cranston was in Saving Private Ryan, or so says IMDB. Very occasionally for me, as I of course am always right.

I bore this blunt trauma whilst thinking about housing.

The high cost of housing in Australia, especially in Sydney, has been a particularly sticky news item as median home values encroach on the $1m mark. Recently, in the hipster-centric district of Sydney’s Surry Hills, an abandoned town-house with the dimensions of the box my TV came in, whose lone toilet was outside as part of a kitchen-slash-bathroom-thingy in the courtyard sold for, get this, $1.1m. At auction.

That’s right, 120 people showed up to seriously bid on this on-fire garbage can where the auctioneer baited them up to six figures “IgotfiveblehblehblehEIGHTblehblehthishouseisapieceofshitblehblehbleherbodysayHEYerbodysayHOOOOblehtheresadeadbodyinsideONEMILLION!”

If you read the above official auctioneer transcript you’ll notice the dead body reference. The previous occupant died in it and lay there for eight years before anyone noticed what a great investment opportunity it could be. The new owners reportedly plan to renovate, obvs.

If it were me I’d also flush the plumbing through with holy water until the house has been thoroughly exorcised. Even then I have a feeling the TV would turn itself on.

Anyway… my point is that house pricing is insane based on both the above and my own recent acquisition of an apartment just shy of one million dollary-doos. But then two weeks ago, I watched a piece on the local news about the generational home ownership gap between Gen Y’s and my parents’ generation who bought their first homes in the 80s and 90s and continue to leverage their properties into yet more properties today.

I was sitting on my couch being suitably outraged until a gruffish older gent pointed out an inarguable point that, whilst prices are absurdly high, young people are also diverting huge volumes into other things rather than savings, and that of course they can’t get a deposit together if they’re happy to throw down $30k on a wedding.

A wedding + a car + assorted night life and consumer tech expenses would amount to a deposit on a starter home somewhere “up and coming”, i.e. “not as stabby as it used to be.”

The average cost of an Australian wedding has been trending upwards for years (yes, besides inflation, nerd) and currently comes in at over $36k, and that’s not counting the engagement ring which costs roughly one car just on its own.

Jeweller: “This is an exquisite stone, internally flawless, triple excellent and of course conflict free. Try not to smudge it”

Customer:*glances at price tag* “Out of interest, just out of interest… do you have anything conflict full? You know, like smuggled in goats like in that Leonardo DiCaprio movie where he had the accent?”

That’s the “average” price though, not the median which is likely lower, because for every Rupert Murdoch or *cough* Salim Mehajer (Google “Douchebag mayor hires fleet of luxury cars and hair gel to make a douche-POCALYPSE wedding video” to find out more) there’s about twenty “salt of the earth” types getting married in the woods like bears.

That being said, I haven’t been to a wedding in the past three years that would have been much under the average, and most I’m pretty sure would have cost more. Of course, at the risk of falling to stand-up stereotype, as a man it’s entirely possible I’m being overly unemotional about this because, as my lady pointedly pointed out by poking me hard in the chest that it’s a very important once-in-a-life-time event, idiot. 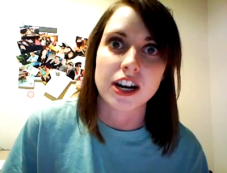 Rather than point out that statically, it’s more like a twice-in-a-lifetimeow-ow-ow-ow!, I happily concede that weddings really are pretty awesome, especially when it’s one of your core friend group getting married.

I went to one this weekend and it was so beautiful. The only low point was when the Celebrant recounted the moments of epic movie romance by the groom such as when he jumped a fence to run to her in the rain.

Whilst all girls present teared up, all the boyfriends sat there thinking “Oh, gee THANKS Edward! Here I am, trying my best and you go full The Notebook and now I look like an asshole!”

The Notebook BTW, is in no way a realistic standard to aspire to, based entirely on the sex scene where Ryan Gosling and Rachel McAdams, standing on opposite sides of the room, awkwardly take turns taking their own clothes off before having puritan floor sex like two mannequins stacked on top of each other for easy shipping. Have you seen Ryan Gosling?? As if Regina George wouldn’t go bananas all over that.

And after the ceremony it’s Time. To party! Food! OMG the food! Lobster and abalone! In the same sitting! And Hennessy! Hennessy everywhere. Effing. Yum.

Then there’s dancing. This is always interesting towards the end of the night when the DJ goes full hip-hop. A single black man in this otherwise Cambodian-Filipino wedding, apparently called into being by R. Kelly’s Ignition (Remix) suddenly materialised in the middle of the floor, and really went for it.

I joined in of course, but away from Disco Stu to avoid getting shown up. 90’s R&B is the only time I’ll ever dance my very simplified two step so as to avoid appearing in a snarky Snapchat video and/or YouTube “Fails” complication.

Even then I always bring a drink onto the floor with me to guard against any exuberant arm movement i.e. a nae-nae. But do you know what the very, very best part of wedding dancing is? It’s when Lil Jon announces his arrival with all the subtly of the Kool-Aid man crashing through a wall, screaming (along with all guests and wait staff) a euphemism for the oldest form of birth control there is. Watch out! Nanna’s “getting low!”

I’ll just leave you here with this romantic ditty: